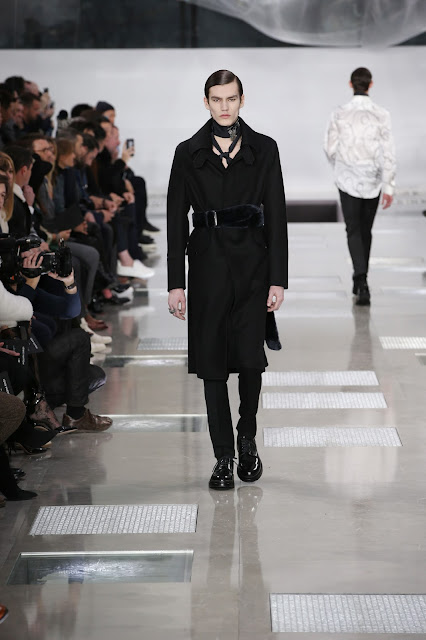 "FUTURE HERITAGE”
A Jacques-Henri Lartigue image - a stack of Louis Vuitton trunks, shadowed by the Tour Eiffel - formed the jumping-off point for the Fall 2016 Louis Vuitton menswear collection. “This season I was inspired by Paris - old and new,” says Kim Jones, Men’s Artistic Director of Louis Vuitton. The result is a conversation between past and present, 162 years captured in Louis Vuitton’s archives and the wardrobe of the modern man: a future heritage. The conversation starts with the past, the Art Deco period. An era that established an archetypal image of Paris as the art, culture and fashion capital of the world, it also provides our enduring blue-print for male sartorial elegance. Alexis Von Rosenberg, the Baron de Redé, a quintessentially Parisian twentieth century European aesthete, inspires jewellery that riffs on distinctly dandy styles. Born in 1922 and living until the twenty-first century, he is a link between the past and present. A selection of classic menswear pieces - trench coats, fur coats, tailored suits, sweaters - archetypes that form the foundations of male style, and of Louis Vuitton’s own masculine fashion identity. Then, a voyage begins, the collection travelling through to the present day, imbuing the garments with a sense of now. Today means utility, functionality, a fusing of substance and style. Outerwear is lightweight and reversible, graphic patterned shearlings appear unlined but superlatively finished, the inside as perfect as the outer. Cashmere is fused with silk in a featherweight fabrication. A new line of Louis Vuitton denim reinterprets the humble cotton blue jean through the Louis Vuitton lexicon of luxury. Treated by specialist artisans using the wax and indigo-painting technique “Roketsu,” the crackled finish of the fabric is unique to each garment created, including leather, created for the first time using this technique in an expression of Louis Vuitton savoir-faire. A technique originating in Japan, it again ties to the House’s past, to the Japonism that inspired European artists of the turn-of-the-century, as well as the iconic Louis Vuitton Monogram. The Monogram is the collection’s key motif. This season the iconic canvas has been reworked into a timeless new variation: Monogram Eclipse, a subtle contrast of grey and black shadow tones inspired by the black leather on the famous Malle Courrier in the Louis Vuitton archives. The play of shiny and matt continues through the introduction of Monogram Illusion, a series of smooth leather bags and trunks, with silkscreened transparent Monogram which shimmers in the light. The iconic motif is also used to create a series of mirror-lined gentleman’s trunks - tool-kit, vanity, attaché and mobile bar, the latter an homage to archive 1920’s styles and created in the specialized made-to-order Vuitton workshop in Asnières. Throughout, accessories and clothing work in synergy, borrowing colors and motifs. An innovative and sophisticated leather zip, closes bags and adds a graphic point of delineation on garments. A series of utilitarian small leather goods, clip and dangle from bags, echoing the multi pocketed utility shapes of the garments. Accessories also offer men a new wardrobe, of archetypal bag designs - Keepall, camera bag, tote, messenger bag, and a backpack shape inspired by Louis Vuitton’s Noé. Shoes are classic men’s styles, polished military boots or Oxford brogues with a wedge outsole and the new Monogram Eclipse welt. Colors are subtle, redolent of Paris: graphite grey and black, French navy, a topiary evergreen, Damier shades of brown and a pale, powdery Tuileries laurel. The Art Deco period grounds the decorative motifs: masculine profiles in a 1930’s style or a ribbon motif that sketches out the words “Volez Voguez Voyagez”, archive trunk stamps feature as laster-cutting and flocked print, while geometric inserts taken from Louis Vuitton blankets are applied to scarves and outerwear in shearlings and cashmere. The Annapurna and Karakoram designs are joined by the Satapurna, a new graphic created by Kim Jones.

I first saw Shinji’s piece in Tokyo and immediately fell in love with his work. It is an honor for me to include it in the Louis Vuitton men’s show this season. " Kim Jones " This is a new installation where cloth is used to make the observer aware of the domains of time and space. The cloth moves up and down, causing a fluctuation of the borders that divide various territories. When people watch this cloth, they will probably feel that its movements go against their expectations of how things should move according to the force of gravity. Perhaps some people will feel that time is passing quickly while others might feel that time is being slowed down. By jolting the sensations, a dimension of time and space that differs from everyday life can be created. I hope that in this dimension, people will feel their established notions about gravity being shaken, and that through their bodies and senses they will experience the contradictions to their expectations. This work expresses the breaking down of existing values and creating anew. " Shinji Ohmaki 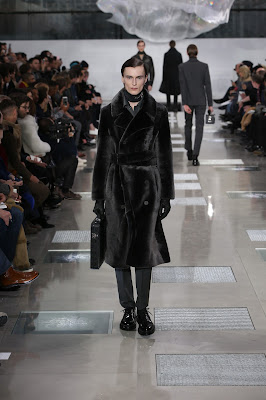 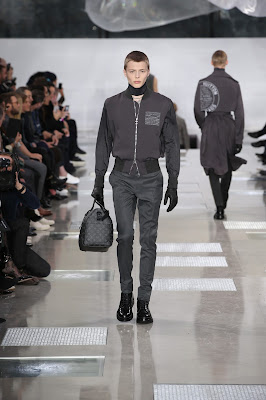 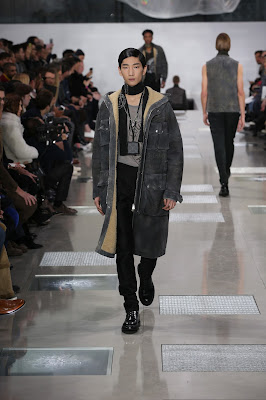 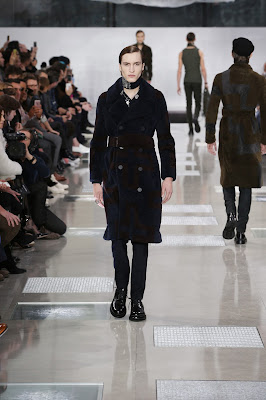 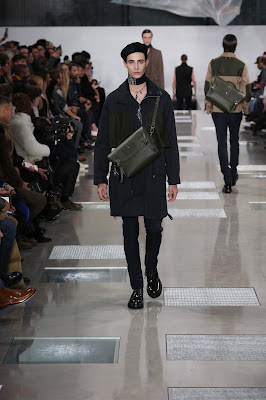 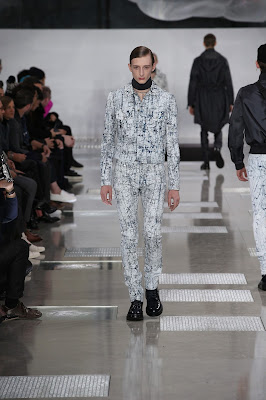 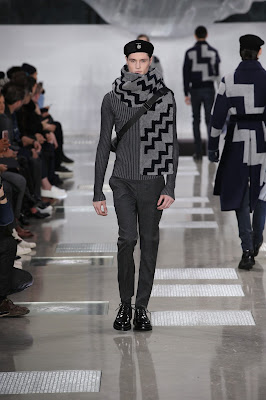 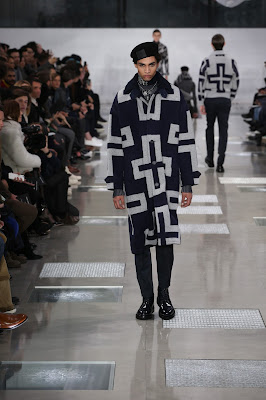 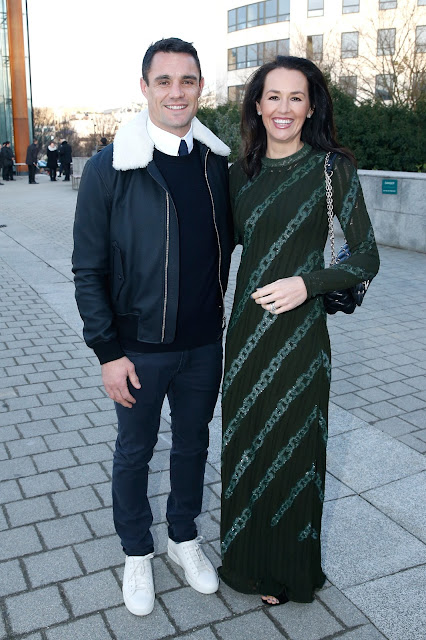 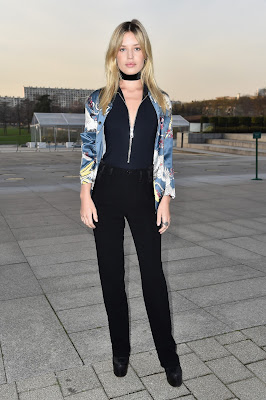 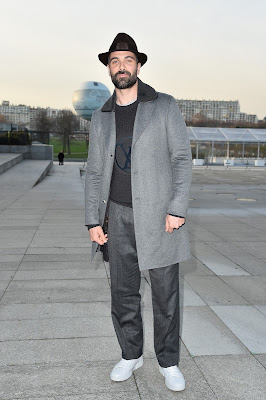 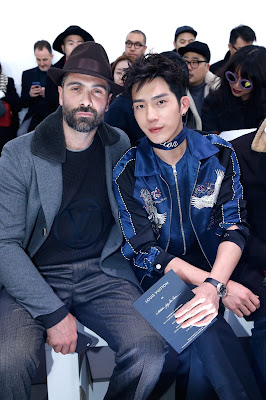 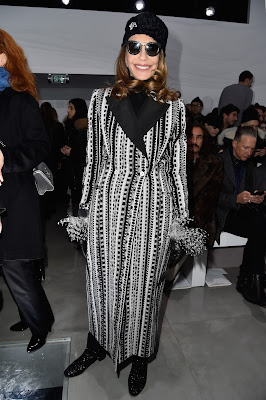 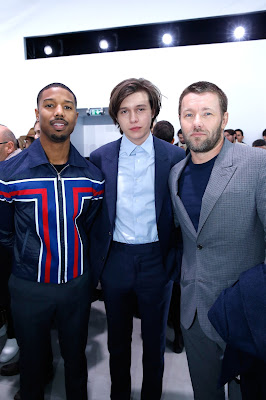 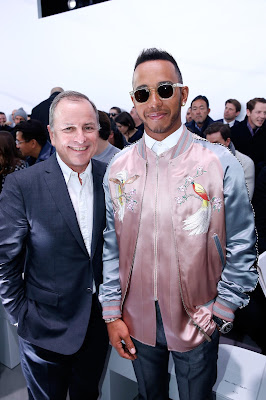 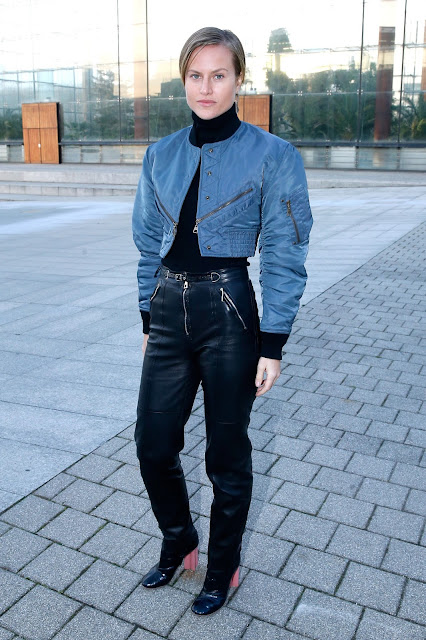